The Third Reich In Flames Tour

The Third Reich in Flames Tour, is a 2 or 3 day guided Tour, exploring many former Third Reich era locations, on the Obersalzberg and historic places, in and around the beautiful little Bavarian town of Berchtesgaden, near Salzburg.

However, if you require a longer Third Reich tour, this tour can be extended to 4 or 5 days and would include Munich, Dachau & Landsberg (see Munich & Dachau Tour information further down this page)

Therefore, from the moment we step out of our cozy Bavarian guesthouse, or hotel, you will witness the most stunning & photogenic panoramic scenery in the whole of Southern Germany – The Berchtesgadener Alps.

SALTMINE – If you wish, we can also visit the local 500 year old Saltmine (optional extra)

We will have delicious & relaxing lunches, in stunning lakeside and mountainside locations, together with simply breathtaking views. We will sample the local Bavarian beers and dine in the evenings, in charming local restaurants

Below:  Former location and the retaining wall of Adolf Hitler’s huge Obersalzberg house – The Berghof

EAGLE’S NEST – The so – called “Eagle’s Nest” (Kehlsteinhaus), perched high up on the Kehlstein Mountain- contrary to what many people think – was not Hitler’s home on the Obersalzberg.

His huge Villa – “The Berghof” – was lower down the mountain.

Therefore, thousands of tourists, who visit this area, every year, miss out on a very important opportunity, to view the location of Hitler’s house – “The Berghof” and so many crucial Third Reich locations, dotted all around it

OBERSALZBERG –  We reciprocate Hitler’s daily walk to the Teehause, on the Mooslahnerkopf, with Eva Braun, Albert Speer, Goering, Ribbentrop etc, his secretaries & his dog Blondi. (We follow the exact route). Incredible & stunning mountain scenery can be viewed from here ! It was one of Hitler’s favourite locations and he made many military decisions here, as he gazed towards his beloved Austrian homeland.

On a clear day, you can see Salzburg Castle in the distance !

However, we have to get the early morning bus, to avoid the crowds. We travel up to the KEHLSTEINHAUS “Eagle’s Nest”, by bus and then enter the original brass paneled elevator, that takes us up into the building itself, which nowadays is a restaurant

BERGHOF – location and ruins of Hitler’s once stunning main house, on the Obersalzberg and it’s  original rear retaining wall.  Hitler bought “Haus Wachenfeld” and had it extended several times, changing the name to the Berghof

ADVANCE & LIBERATION OF BERCHTESGADEN – I will show you the key sites, where American & French troops crossed the Salzach River and entered the Berchtesgaden area (101st Airborne Easy Company etc)

FORTIFIED UNDERGROUND TUNNEL SYSTEM TO THE BERGHOF – You will see the Zum Turken’s air raid shelter, sentry post and some of the 4 miles of deep, fortified underground tunnels, to Bormann’s Villa and Hitler’s Berghof, which are directly underneath it. We can explore a good preserved section of this extensive tunnel system

ALBERT SPEER – Albert Speer’s former residence & architects studio- on the Obersalzberg. However, this is private property, but we can view from a distance for photos

MOLL BUNKERS – I will show you an intact concrete “Moll” Bunker and traces of the S.S inner perimeter security fencing. The Moll Bunkers were solely to protect 2 S.S guards, in the event of an allied air-raid.

30 of them were built on the Obersalzberg & in and around Berchtesgaden. Only 1 intact one survives and the ruins of several others

THEATRE – Theater Hall -The foundations of the huge theatre

BERCHTESGADEN  -The beautiful Bavarian town of Berchtesgaden and the Railway station, where Hitler and his important guests would arrive by train

PLATTERHOF -Location of the former Platterhof  Hotel -Obersalzberg and the Greenhouse

OBERSEE, HINTERSEE & KONIGSEE LAKES – The stunning Obersee, Hintersee & Konigsee Lakes, which Hitler and Eva Braun visited for relaxation. Eva Braun made several of her well known home movies here, on the shores of the beautiful Konigsee

MEIN KAMPF – Foundations of a little wooden chalet, in the forest (Kampfhaus), where Hitler completed his book “Mein Kampf” (My Struggle)

BORMANN – A tunnel exit, that once led from Bormann’s Villa (optional as difficult terrain)

SIGHTSEEING – Therefore, a wonderful location, to spend a vacation, sightseeing, hiking, cycling, mountain climbing, or just relaxing outside one of many superb restaurants

MUNCHEN – You will sample the delights of the beautiful old German city of Munich. The capital of Bavaria.

As well as the former Third Reich locations listed below, you will see Munich’s stunning architecture and experience it’s vibrant & very colourful atmosphere.

ARCHITECTURE – We will pass by the elegant Frauenkirche, the old and new Rathaus buildings, meander through Munich’s old cobbled streets, sample a traditional Bavarian Beer in a local Brewery and have lunch in the famous Markplatz.

HOFBRAUHAUS – The Hofbrauhaus in Munich (Hitler’s early speeches were held here) Great place for a photo, lunch, or a cold German beer from the brewery itself !

BURGERBRAUKELLAR – The former Burgerbraukellar location in Munich (Hitler’s favoured Beer Kellar for speeches). I will show you the exact spot where Georg Elser’s bomb went off

BEER HALL PUTSCH  – We can follow the exact route taken by the “Putschist’s” over the beuatiful Isar River and into Munich’s old town. (optional)

Below: One of Hitler’s apartments was at the front of  this building 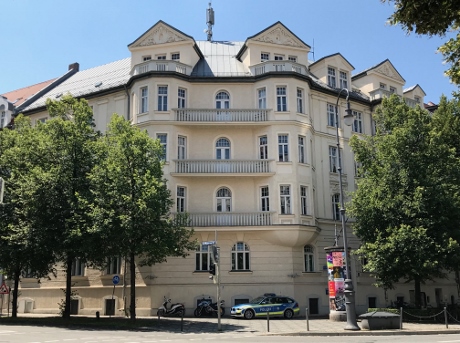 EVA BRAUN – I will show you the location where Hitler met Eva Braun, early Nazi party offices, locations where Hitler painted his pictures and where he would have lunch, including in the Hofgarten

PAINTING – I will show you locations ,where failed artist Hitler, enjoyed his passion for painting

2 of Hitler’s former residences in Munich 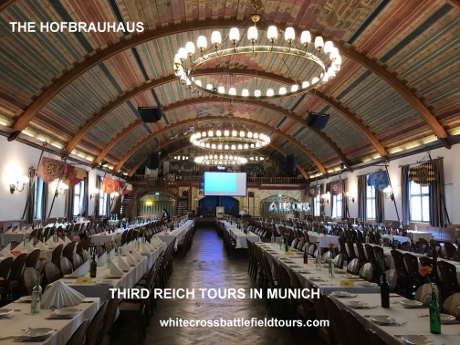 MUNICH UNIVERSITY – The Munich University, where Sophie & Hans dropped thousands of anti-Nazi leaflets. However – they were caught,  interrogated by the Gestapo and ultimately executed

TRIAL -The Courthouse building where they were put on trial, the apartment where they lived, their graves and some poignant memorials to this extremely brave group of young students

STADELHEIM  – Stadelheim Prison, where the members of the White Rose were incarcerated and executed

The Third Reich in Flames Tour

During this half day tour, i will show you the excellent Dachau museum, the former execution yard, the Jourhaus (Main gate to prisoner compound), many rebuilt watchtowers, the former Appelplatz (roll call square), barrack foundations, crematorium, the barbaric and intact cell block, extremely cruel methods of torture, an execution wall in the woods, former industrial buildings

As well as – SS officer accommodation, mortuary, shooting range, a re-constructed prisoner barrack, with latrines and wooden tiered beds, the route of advance of American troops who liberated the camp, the location where the “Death Train” was discovered, plus many impressive memorials, to the 41,500 inmates, that tragically perished here 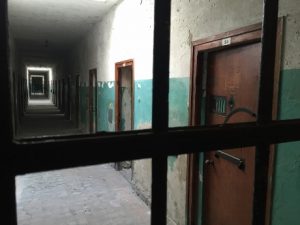 LUNCH – We will have lunch in the charming medieval town of Dachau itself. A beautiful little town with it’s cobbled streets

KAUFERING CAMPS We can visit the Dachau sub-camps of KAUFERING (liberated by 101st Airborne) & and drive to the historic Landsberg Prison, where so many Nazis were executed and where Hitler was imprisoned.

LANDSBERG is a delightful medieval Bavarian town. Hitler wrote Mein Kampf here (and on the Obersalzberg) in his prison cell. Outside the prison is a cemetery where many S.S officers lie. (They were executed here after the war, for war crimes)

The Third Reich in Flames Tour