Remembering the millions of victims who perished during the Holocaust

I have been a dedicated Holocaust researcher, for over 20 years and have frequently visited, many of the Concentration Camps,  all over Europe and interviewed survivors and witnesses of the Holocaust and recorded their testimonies

Holocaust Tours – I will show you lots of  remote locations- such as railway deportation stations, sub-camps, derelict factories.

This is a 2 day guided Holocaust Tour, visiting the following locations in Southern Germany, such as:

Landsberg Prison, Landsberg (where Hitler was imprisoned and many Nazis executed)

Below photo : One of my 2 meetings and interviews, with SOBIBOR death camp, escape survivor – Thomas “Toivi” Blatt, in 2010:

This is a 3 day Holocaust Tour, visiting the following locations in Central & North Eastern Germany, such as: 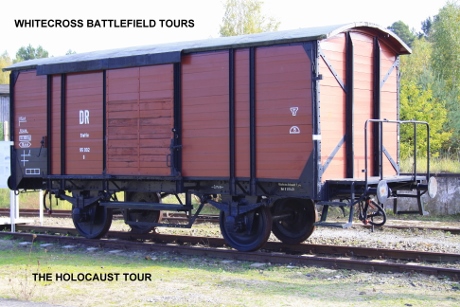 This is a 3 or 4 day Holocaust Tour, visiting locations, in Poland, such as:

AUSCHWITZ  Extermination Camps 1 & 11 BIRKENAU, (Poland) including the remains of 5 massive gas chambers, Kommandant Rudolf Hoess’s family home, (reconstructed gallows -on the exact spot where Hoess was hung after his trial).

If you take a coach tour from Krakow, you will not see enough here !  Auschwitz is huge and 2 days are required to explore it properly and away from the crowds. The coach trip is 1.5 hours each way on terrible roads. However, in my car, it takes only one hour each way and we get there first thing in the morning, before the masses of coaches arrive.

My Auschwitz Tour, shows you locations inside and outside the camp, that 99% of people don’t know about, or do they visit. But they are extremely important, if you wish to understand what occurred here and the sheer vastness of the 3 camp complexes….

2 impressive and original sections of the Krakow ghetto wall

Photo below:  My photo taken of Sobibor Death Camp survivor – Thomas “Toivi” Blatt in 2010. Here, Thomas gazes with silent reflection, over the huge Majdanek death camp, in Lublin, Poland. He sits on the edge of the “pile of human ash” monument.

I met this dedicated Holocaust /Sobibor survivor and wonderful man, twice in 2010, in Lublin and I had the fortune to record his experiences. I drove him out to Sobibor and Majdanek and we spoke for many hours together

OTHER LOCATIONS THAT CAN BE CUSTOMISED INTO A , 3 OR 4 DAY, HOLOCAUST TOUR:

MAUTHAUSEN & MAUTHAUSEN QUARRY (near Linz, Austria) Mauthausen is huge and survives virtually intact, as most of the camp was made with granite, from the nearby Wiener Graben quarry, with it’s notorious “stairs of Death”.

As well as a visit to the nearby remains, of the dreadful GUSEN camps and memorial.

As well as – Gas chamber  and Museum & The story of the daring, dangerous, mass breakout by 300 inmates. (See the film ” Escape from Sobibor”).

Sobibor was situated near Bug River, close to the Ukranian border and was hidden deep in the forests

In 2010 – i interviewed one of the escapees, of the Sobibor revolt -Thomas “Toivi” Blatt and I will tell you the true story, of his role in the escape and his desperate days on the run, hunted down, by thousands of heavily armed S.S soldiers, through the pine forests of Eastern Poland

Therefore, I will relay his incredible true story to you, as we travel between Holocaust LOCATIONS.

TREBLINKA (Poland). Treblinka was a death camp. 900,00 were murdered here. Therefore, I will show you the foundations of buildings at Treblinka, as well as, impressive memorials, location of the slave labour quarry and location of the gas chambers.